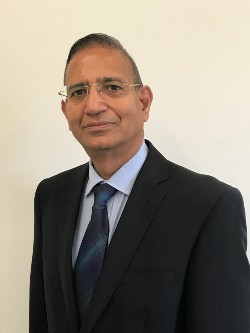 Umesh Dashora is a consultant in Hastings and has trained in diabetes and endocrinology at Newcastle and Southampton among other centres.

He has been a keen member of the ABCD executive team since 2013 and has actively promoted and contributed to the ABCD journal as the news editor. He has represented ABCD in JBDS-IP and contributed to a number of recent national guidelines the most recent being diabetes management during delivery in which he is the first author. This is now published. Umesh and Dinesh have developed an online module for the Royal College of Midwives which has had very good uptake.

Umesh also published on the use of U500 in UK on behalf of ABCD .

He is the new meeting secretary of ABCD. He also holds the regional adviser position for the Royal colleges of Physicians of London and Edinburgh.